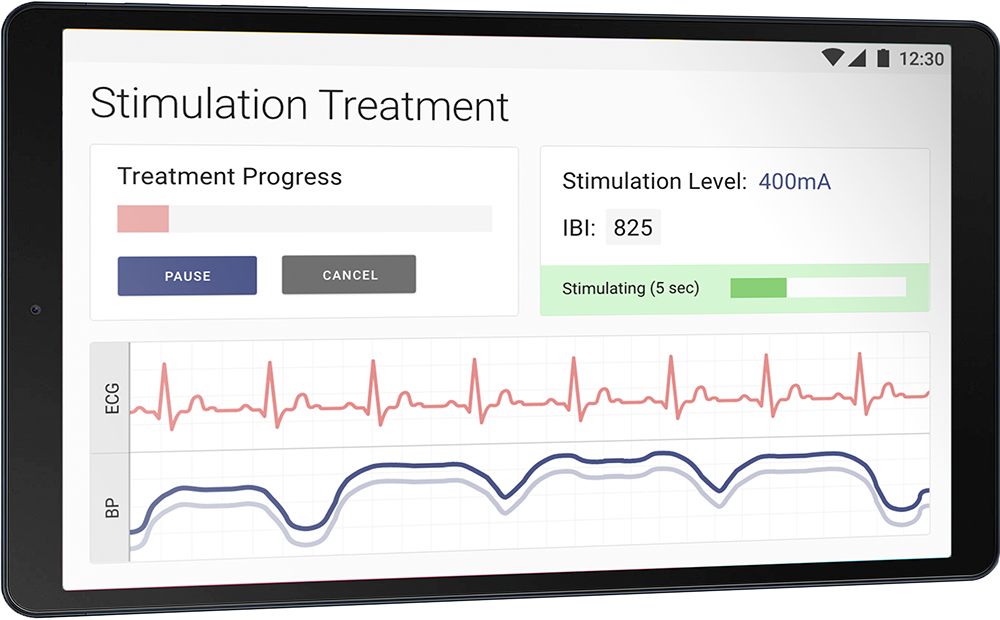 Designing an interface for an experimental chronic pain treatment

In the spring of 2019, a team at the Philipps University Marburg in Germany were applying for a Phase II EU Horizon 2020 grant fund the commercialization of an experimental treatment for chronic pain. Since over 50 million Americans and 100 million Europeans suffer from chronic pain (pain that lasts or recurs for more than three months), there was a clear market for the new treatment.

I came to Marburg for 3 months to convert a complex research-oriented procedure into usable solution for pain specialists in the real world. To accomplish this, I worked with a team consisting of Dr. Thieme (pain expert), a businessman, and a hardware engineer. The project involved understanding the current process through observations and interviews, outlining a simplified flow based on research, and designing prototypes to bring the flows to life.

First, I observed Dr. Thieme run a stimulation treatment session (in German) with a patient to familiarize myself with the current process. Second, I interviewed Dr. Thieme to get a deeper understanding of what I had observed. 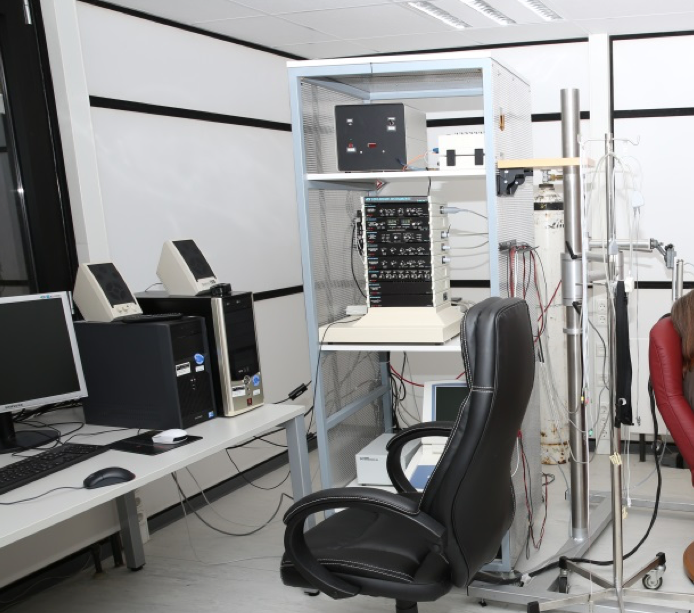 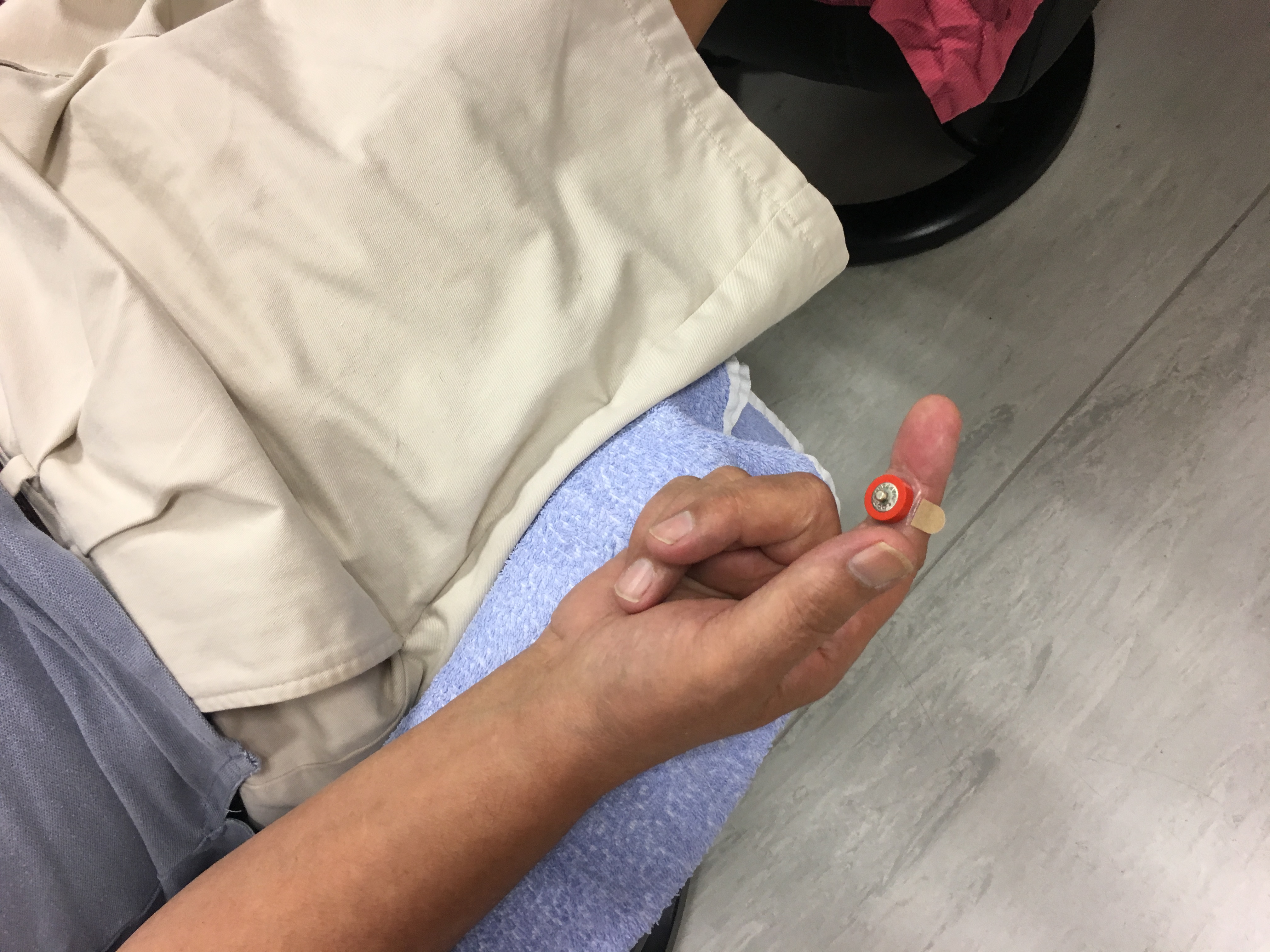 Next, I drafted a high-level flow diagram for the stimulation treatment as a whole and for threshold determination (part of the treatment that determines a patient's threshold for pain). Diagrams were presented to the team, discussed, and revised based on feedback. The resulting diagrams acted as a simple way to communicate the stimulation treatment process and served as a starting point for screen designs. 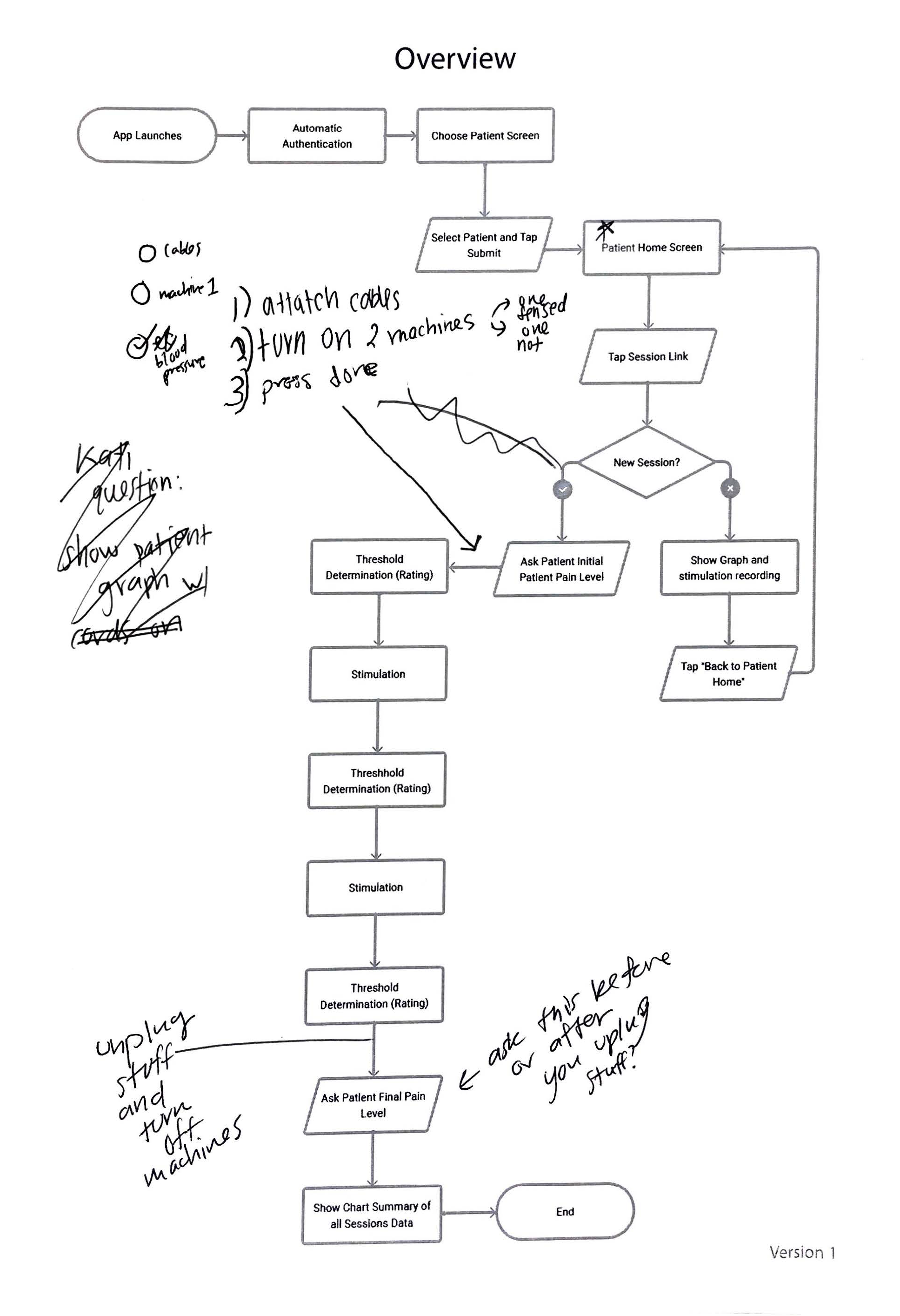 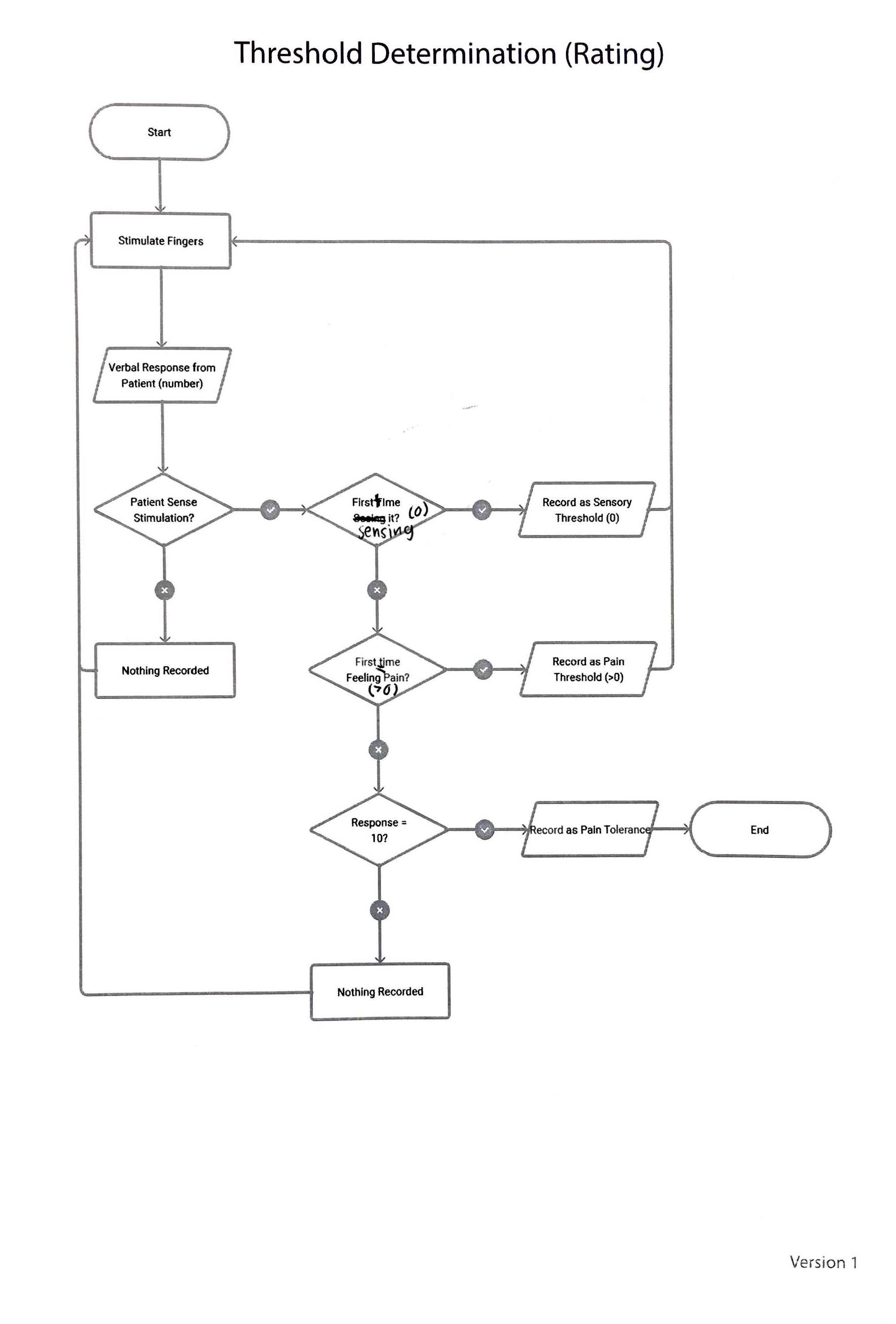 Once I was clear on the steps in the treatment process, I observed the process again to familiarize myself with the current interfaces. I focused on how the Dr. Thieme interacted with the interface, what was displayed on the monitors, what data was recorded, and how the data was recorded. 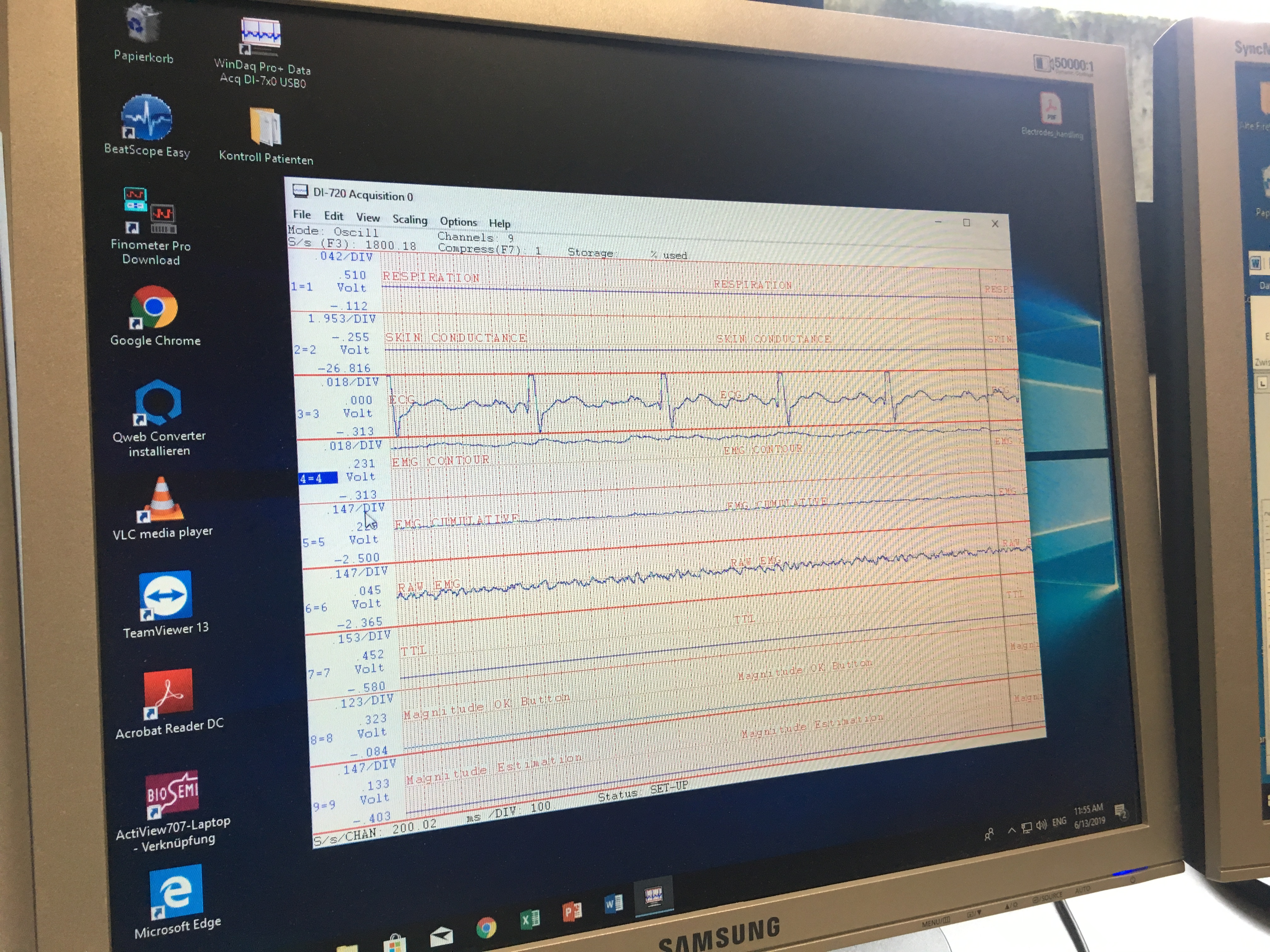 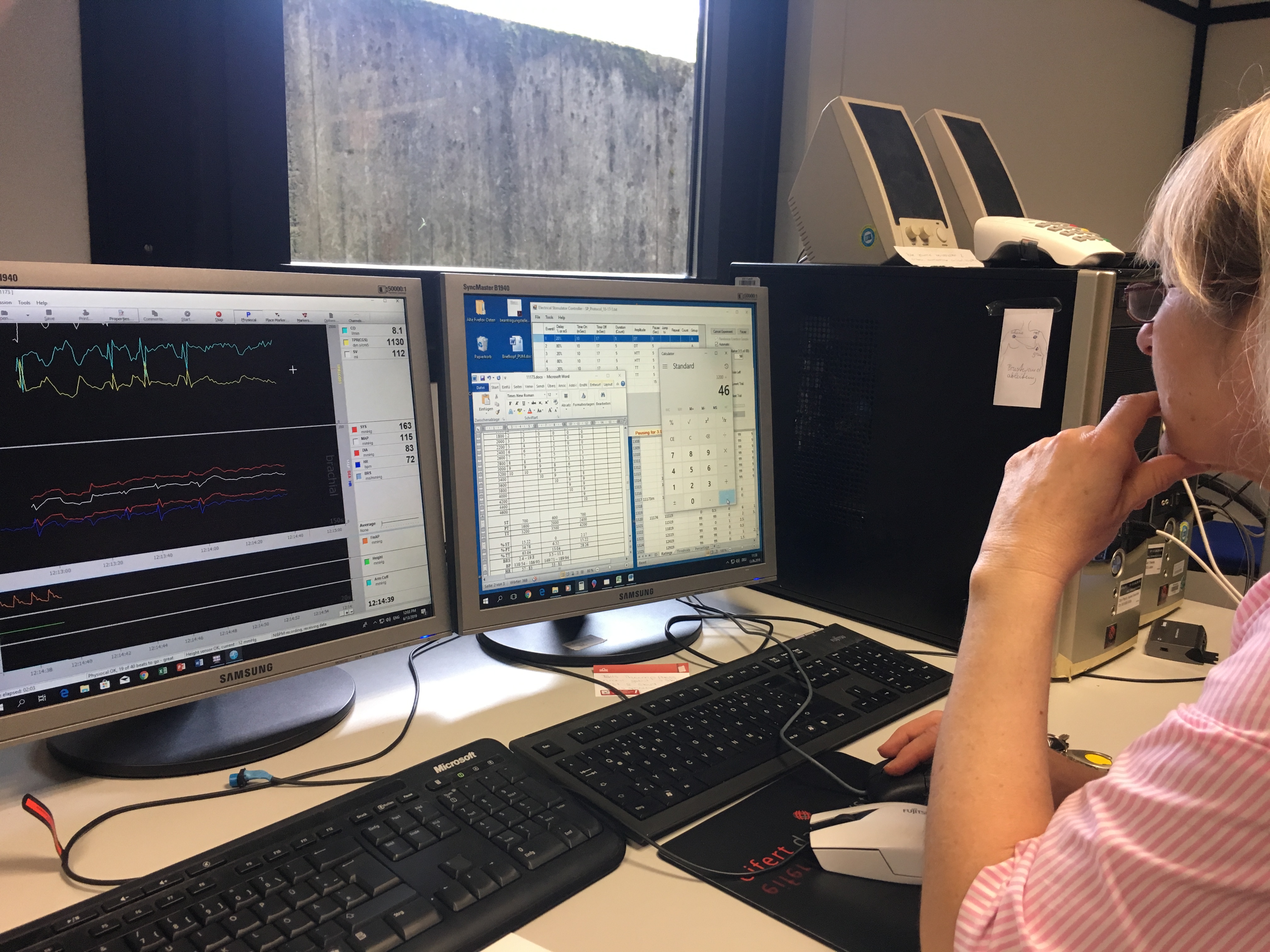 Dr. Thieme interacted with 2 monitors and several windows during the treatment

I also conducted other research (conversations with the team, reviews of past iterations of the system, and online research) to familiarize myself with medical concepts, understand the technology used in the stimulation treatment, and identify design limitations (cost, time, regulations).

After the second round of research, I explores ways to simplify the process. The process had to make sense to pain specialists of all types (therapists, doctors, etc.), reduce opportunities for errors, and fit on a 10" tablet screen.

To see where changes would be possible, I set up a meeting to walk Dr. Thieme through my understanding of the process and uncover the reasoning behind steps in the process (data collection, calculations, documentation) and visuals in the interface (line graphs, flashing elements, numbers).

The conversation revealed that some data was being displayed / collected solely for research purposes and therefore could be removed from the commercialized process. In addition, it confirmed that the manual calculations could be easily automated.

First, I came up with design guidelines based on discussions about users (pain specialists and patients) with the team, session observations, online research into medical device design, and technical limitations (screen size, etc.). Next, I broke up the stimulation treatment process into smaller more manageable sections (log in, patient overview, threshold determination, running treatment, and review).

For each section, I started by exploring possible layouts with low-fidelity wireframes, which I presented to the team. After getting feedback, I used XD and a Google Material Design library to create higher-fidelity wireframes quickly. 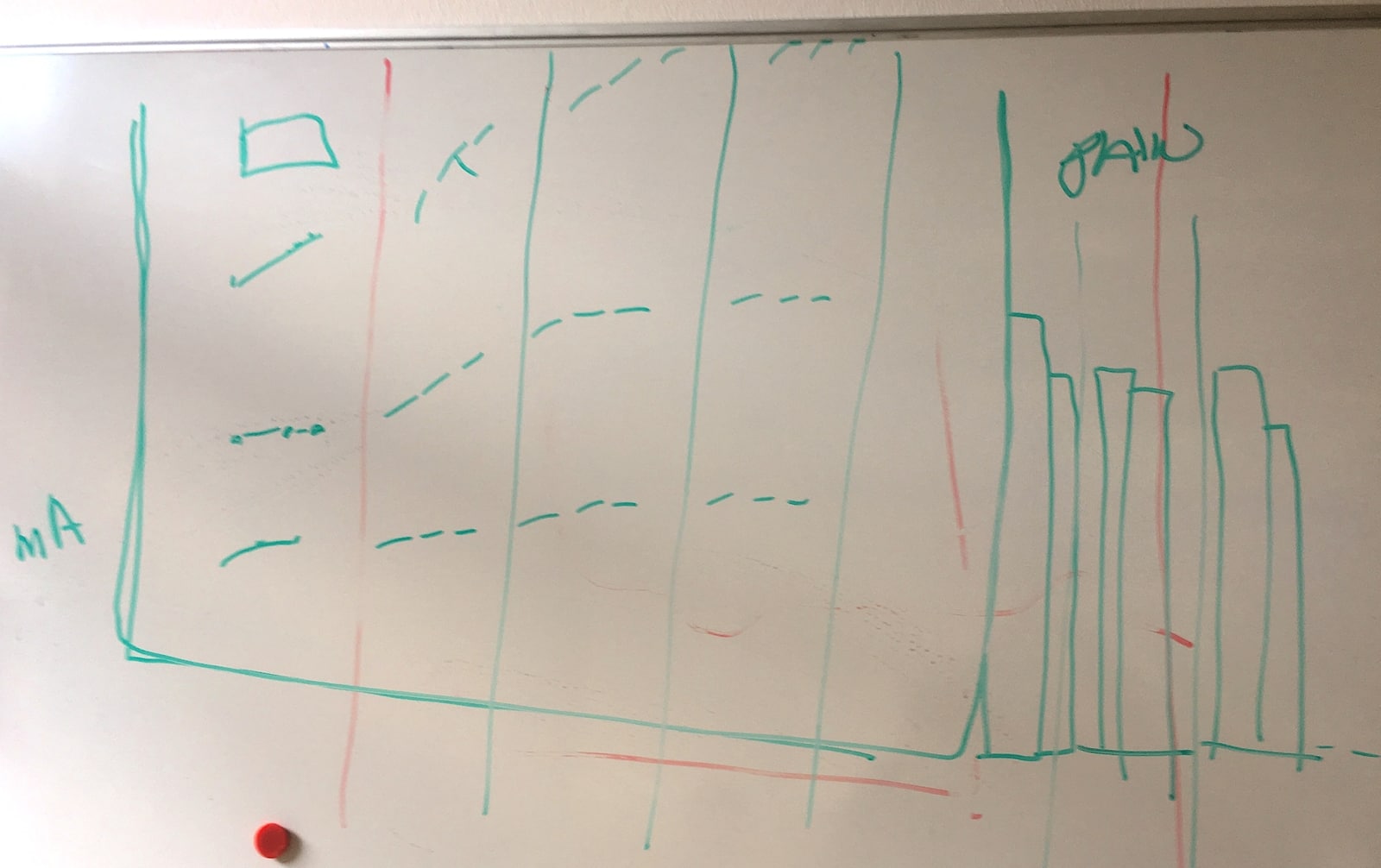 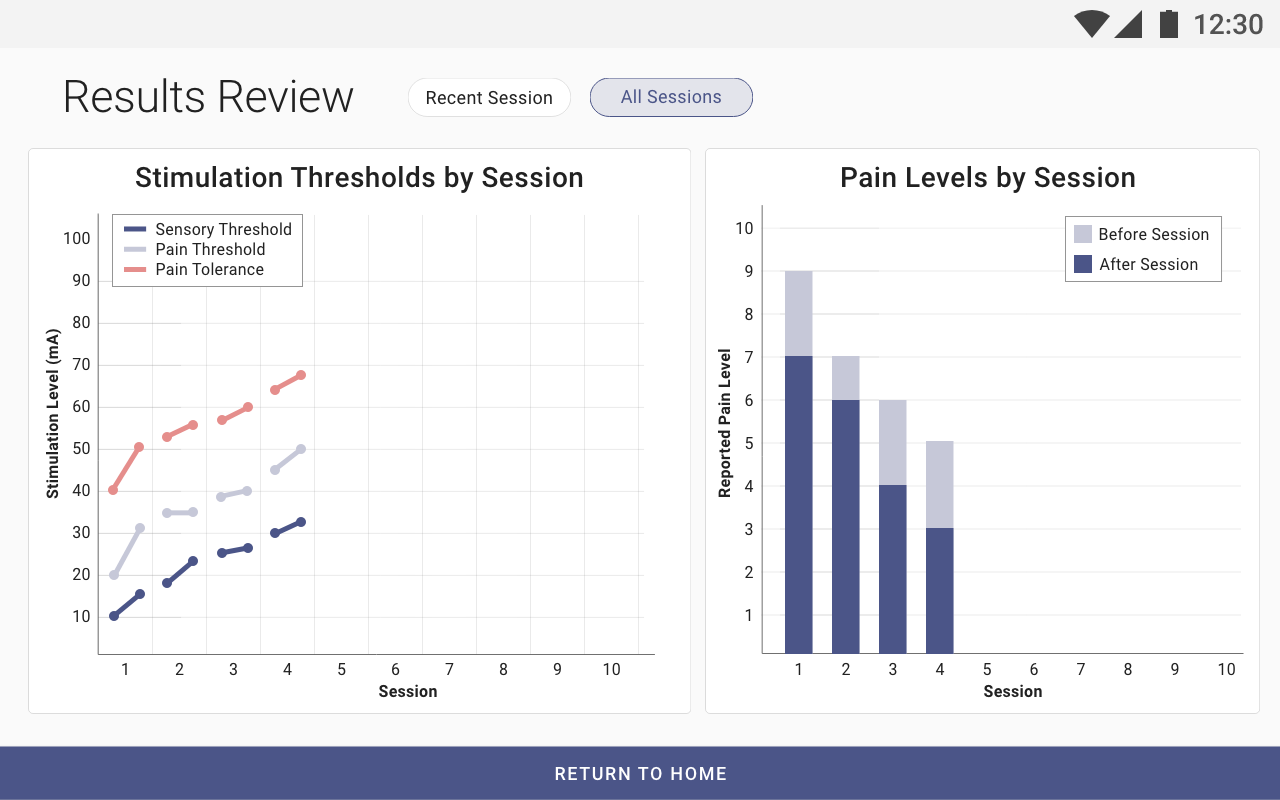 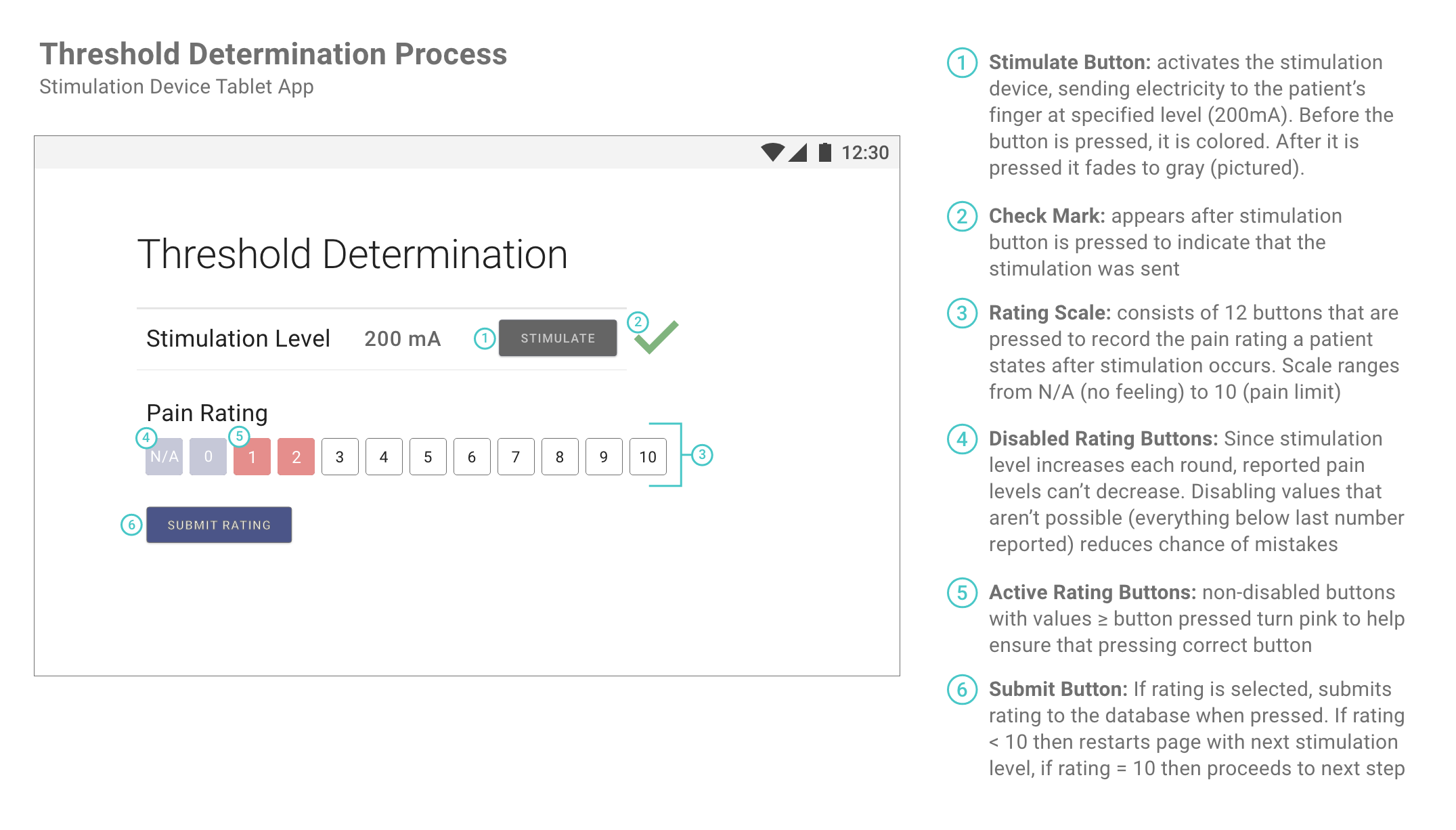 After the designs were complete, I convinced the team to conduct user testing. Since XD wasn’t sufficient to build the kind of open-end prototype with logic I was hoping to test, I turned to bubble.io. Bubble is a no-code tool that features a built-in data base, logic functionality and an affordable monthly plan.

Prototyping with bubble required defining the logic behind the app's functionality and defining how data was recorded and manipulated in the database, which could inform future development. In a few days, I had a web-based prototype ready to share that realistically showed the threshold determination process.

Video of the threshold determination bubble prototype in action

Once the prototype was complete, I found a way to present it on tablet in a realistic way and demonstrated it to the team, who were happy with the design.

However, after presenting the prototype I was told that user testing would be put on hold as it would take too long to get pain specialists they knew into the lab for testing. In addition, the team found out their application wasn’t short-listed for the EU grant, which meant slower progress due to budget limitations. 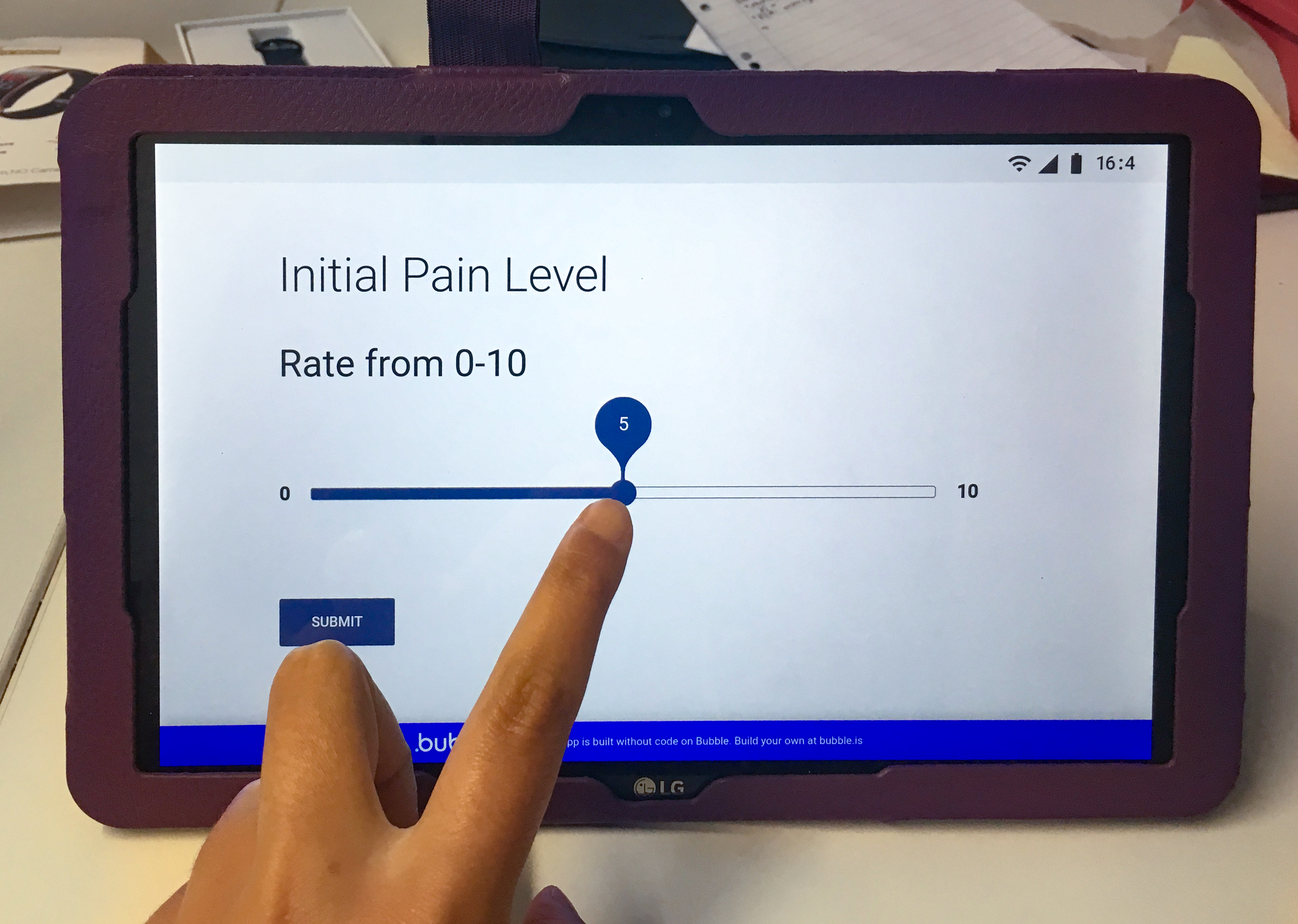 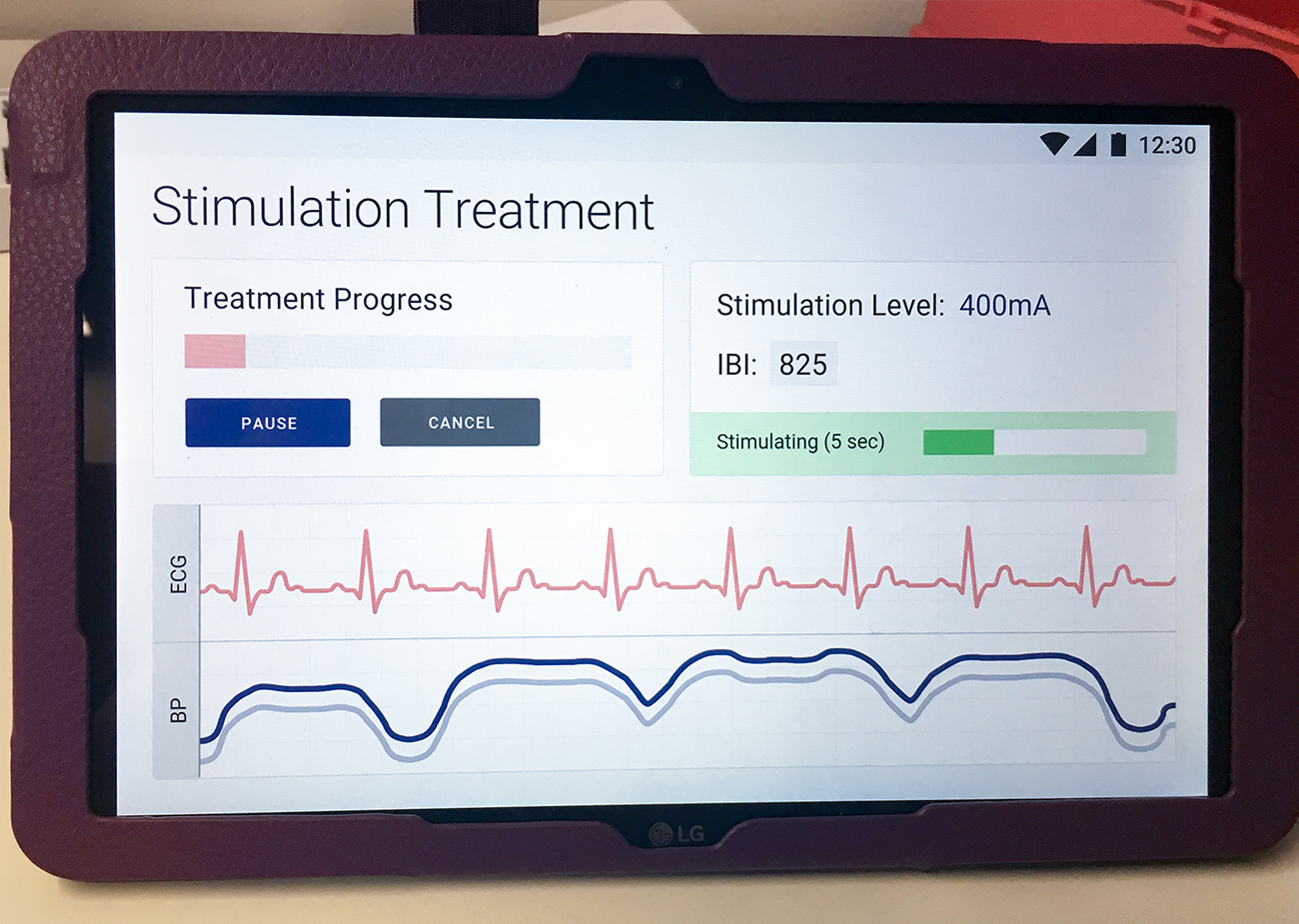 I presented prototypes to the team on a 10" tablet (Left: Bubble, Right: Adobe XD) 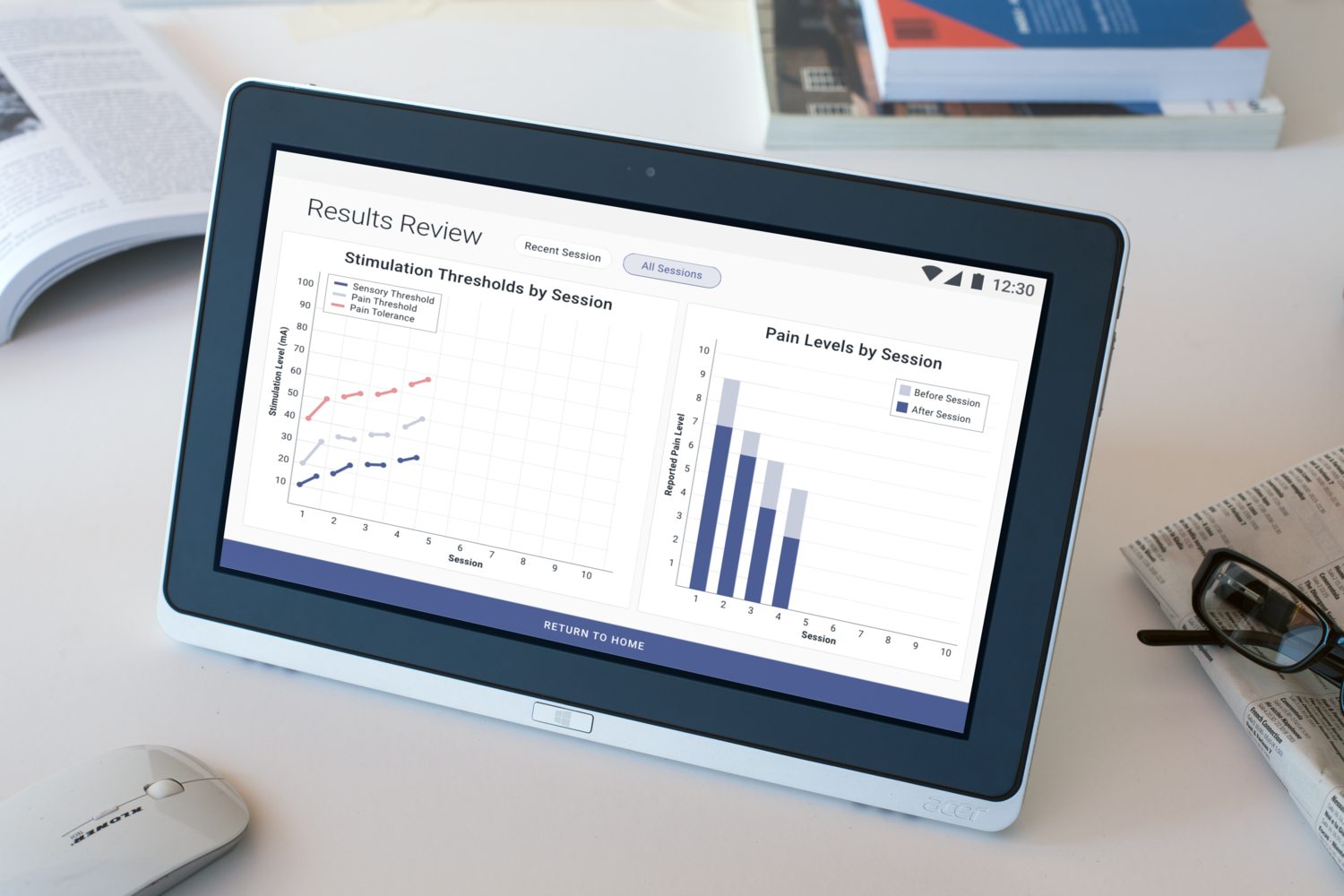 Working on this project taught me a lot. I learned what it was like to work in an interesting new setting (partly academic and partly like a startup) in a foreign country. Although there were struggles, I had managed to help the team align their understanding of the existing process and set the stage for future simplification and commercialization of the stimulation treatment.

If I were to do this project again, I would have pushed for testing from the start and schedule it well in advanced to allow for plenty of time to recruit participants. In addition, I would have scheduled regular meetings with stakeholders in advanced, as busy schedule sometimes meant waiting days for feedback. 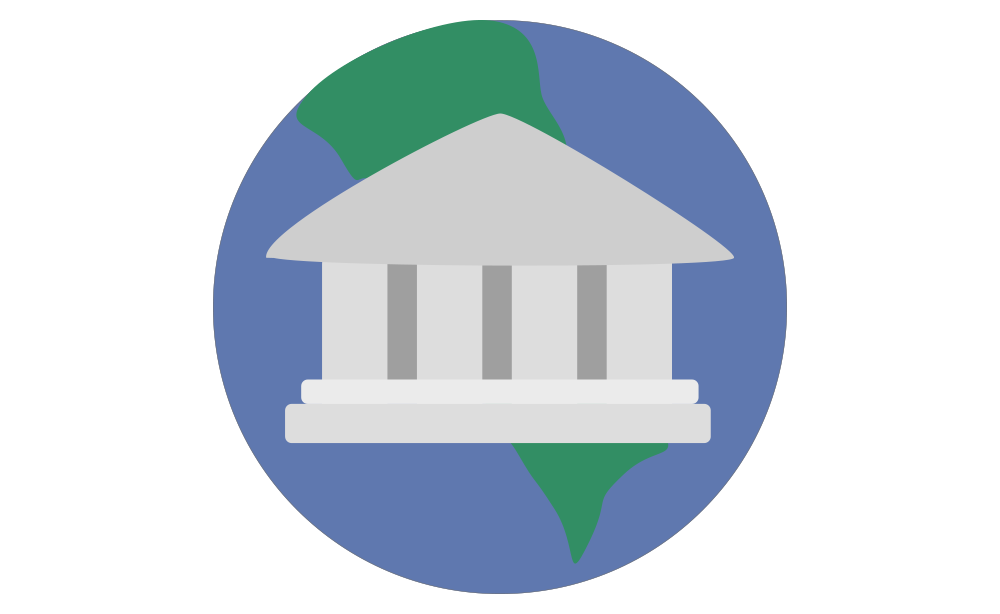 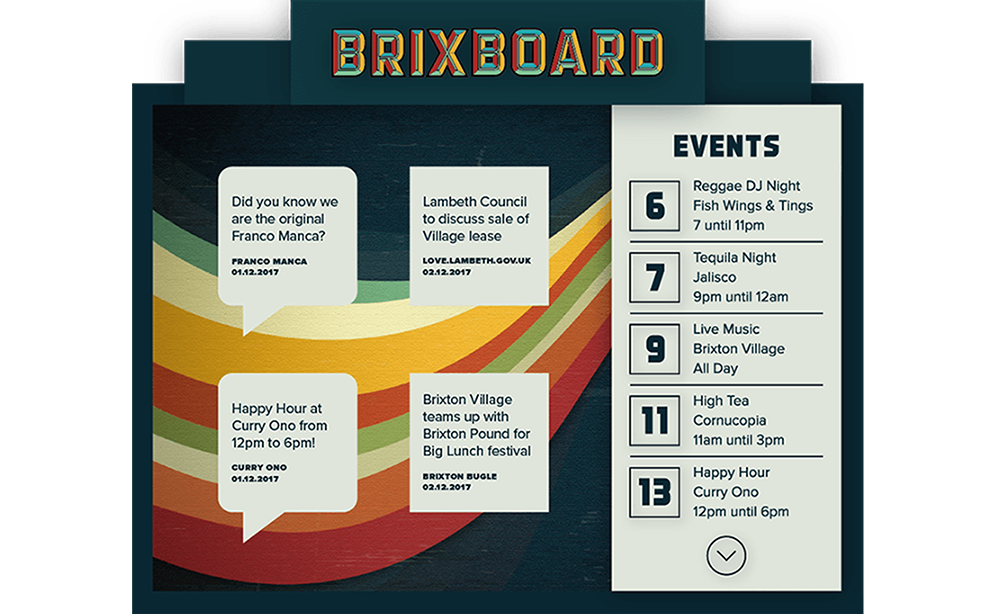